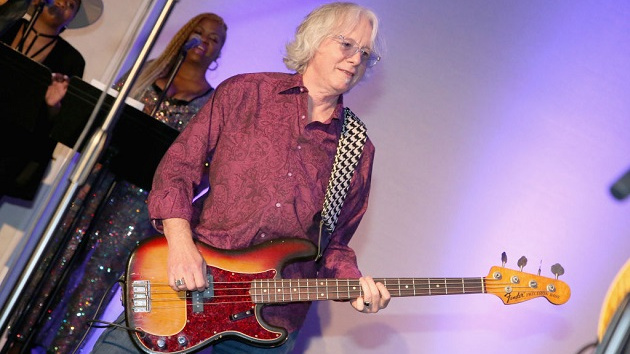 Last Monday, May 16, R.E.M. bassist Mike Mills was presented with an honorary doctor of humanities degree at Mercer University in his childhood hometown of Macon, Georgia, during the school’s commencement ceremony.

Prior to receiving the degree, the 63-year-old Rock & Roll Hall of Famer played a version of his band’s classic song “Losing My Religion,” and a video of the performance has been posted on the university’s official YouTube channel.

Mills co-founded R.E.M. while attending the University of Georgia in Athens, although he never graduated college.

Before performing at the commencement, Mike addressed Mercer’s graduating students, saying, “I am truly and deeply humbled to be standing here today … You’re about to accomplish something I never did, which is to graduate from college. So as you continue your journey, I wish you good luck and Godspeed.”

Mills plays an electric guitar while singing the song, and he was accompanied by his friend, acclaimed violinist Robert McDuffie, who founded Mercer University’s Robert McDuffie Center for Strings in the Townsend School of Music.

In presenting Mills with the honorary degree, the university’s president, William D. Underwood, said, “[T]his region has a great history of producing great musical geniuses, from Little Richard to Otis Redding to the Allman Brothers Band to Chuck Leavell and Robert McDuffie. As great as these musical geniuses have been, none of them had more impact with the genius of their work than Mike Mills.”

Mills was born in Orange County, California, and his family moved to Macon while he was still a baby. In high school, he met drummer Bill Berry, and the two began playing music together, eventually forming R.E.M. with singer Michael Stipe and guitarist Peter Buck in 1980. R.E.M. disbanded in 2011.